How do you write a book? Rules for writers 6: show, don’t tell

Remember all those ‘compositions’ you had to write when you were in primary school? Remember the laborious string of sentences you used to make up, one after the other, documenting all the things you did?
I got up… I had my breakfast… I walked to school… I sat…. I had my lunch…

Everything in chronological order, listing events – almost like giving evidence in court.

I exaggerate here for the sake of effect, of course – but this kind of ‘telling’ is simply stating the facts.

Without colour, without suspense, without engagement. Without making the reader experience anything of what has happened.

When we ask someone to ‘tell us a story’, that’s not the kind of story we have in mind.

We mean: tell me something that will hook me, reel me in, entertain me.

Tell me something that captures my interest, involves me, feels authentic. We should, perhaps, ask someone to ‘show me a story’ – because that’s really what we mean.

Sleeping in the car is cramped. Being a third-hand Honda, it’s no palace to begin with. If it was a van they’d have more room, but fat chance of affording one of those, even back when they thought they had money. Stan says they’re lucky to have any kind of a car at all, which is true, but their luckiness doesn’t make the car any bigger.

It’s as though we’ve been plunged right into the middle of someone’s life, landing there on the passenger seat of the Honda. We – the readers – experience the scene for ourselves and our curiosity is aroused.

First of all, who are ‘they’ and why are they sleeping in a car? Immediately, we feel the poverty, taste the desperation of Stan and whoever he is talking to about being ‘lucky’. The paragraph unpleats like a movie.

Let’s pause for a moment on the word ‘show’.

It doesn’t mean scattering adverbs and adjectives everywhere as though they were going out of fashion, but it does mean choosing your words carefully and being specific.

Details like the ‘third-hand Honda’ paint a far more vivid picture than the word ‘car’ – even if you don’t know what a Honda looks like. You get the picture.

Telling has its place, of course – sometimes you need the simple, straightforward sentence like ‘He poured the coffee’, because that’s what moves the story along.

But in terms of involving your reader, think of the best movies you’ve seen: think of how the story unfolds in a powerful, colourful, visual way. Writers need to capture that colour, that energy, and recreate it inside the reader’s head.

I’ll finish with the opening paragraph of Anthony Doerr’s All the Light We Cannot See – the novel set during the Second World War that won the Pulitzer Prize for Fiction in 2015.

At dusk they pour from the sky. They blow across the ramparts, turn cartwheels over rooftops, flutter into the ravines between houses. Entire streets swirl with them, flashing white against the cobbles. Urgent message to the inhabitants of this town, they say. Depart immediately to open country. 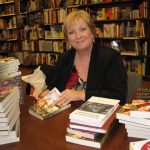