MOVING ABOUT THE PLACE BY EVELYN CONLON

I had the pleasure of interviewing Evelyn Conlon on the publication of her latest collection of short stories, MOVING ABOUT THE PLACE, published by The Blackstaff Press.

Along with Evelyn’s trademark humour, her distinctive voice and her minutely-observed characters, it was such a joy to travel vicariously throughout this collection – a welcome antidote to the boundaries imposed by our interminable lockdowns.

‘I was sent to bed the minute we got in, unreasonably early, I thought. Later, as the noise from the kitchen got louder, I left my room and sat on the top of the stairs. There is always a child on the stairs, otherwise how would we learn’.

These are lines from one of my favourite stories in Evelyn Conlon’s latest collection, MOVING ABOUT THE PLACE. They are from a story called ‘Reasons I Know of That We Are Not Allowed to Speak to Our Grandmother’: a wise, funny and subversive tale about a woman who refuses to conform to the kind of behaviour expected of an older, respectable woman.

But in truth, it’s hard to prefer one story above another: the entire collection is a delight in its shifting viewpoints, its wry observations about human behaviour and its constant feeling of movement, of transcending borders and boundaries.

Launched on the 16th June at the Linenhall Library in Belfast, this new collection by Evelyn Conlon – author of four novels and three previous collections of short stories – fizzes with her distinctive voice as her characters take us on their journeys of discovery to Monaco, to Italy, to Japan, and to Australia.

All of the stories feature movement of one kind or another.

In ‘The Lie of the Land’ we follow a couple to the other side of the world as their marriage lurches along under the weight of a lie constructed many years previously. It’s a tense, poignant story, with Hugh and Dervla forced to confront

‘the small deception that had rolled over their lives, like an iceberg, pulling chunks out of them, and discarding them at will, depositing them like human drumlins, in all sorts of places’.

Mary Lee, the central character in ‘Imagine Them’, is a woman who, explains Evelyn, ‘has stayed in my head’ – a real person, a nineteenth-century Irishwoman, who took the boat to Australia in order to nurse her dying son. She spent the rest of her life there, engaged in political activism, fighting for votes for women.

Like Mary Lee, the historical character, Violet Gibson, has always fascinated Evelyn. Gibson was the woman who attempted to assassinate Mussolini: and very nearly succeeded. In ‘Dear You’, we hear the voice of Violet Gibson as she writes from an asylum in Northampton. She puts her letter in a bottle, apologising for ‘the melodrama of it’. The letter addresses any random stranger who might find her words, washed up on a shore somewhere.

She writes of her growing conviction, during her time in Rome, that to shoot Mussolini was the only response possible ‘to the rotting things growing within that man’. ‘Action’, she says, ‘is the only sane choice’. The crowd turns on her, the police drag her away. She claims anger as her motivation: not madness.

The collection ends with a novella, ‘How Things Are With Hannah These Days’, a story that explores the random nature of life, and how our choices are often constrained by events outside our control.

Long after I finished reading the collection of eleven stories, the characters, and their dilemmas, stay with me. Each story is vivid, subtle, restrained. A recent review by Naoise Dolan asked:

‘Why is Evelyn Conlon not more often spoken of in the same breath as contemporaries Colm Tóibín, John Banville and Sebastian Barry?’

Some answers may be found in Evelyn’s essay, one that gives the title to the collection in which it appears: LOOK! IT’S A WOMAN WRITER!.

‘LOOK!’ is a collection of essays by twenty-one women writers, all born around the mid-1950s, as we reflect on how we came to be writers, and why we still do what we do.

Tales of resilience and tenacity abound. Published by Arlen House, the collection is also out now.

Evelyn Conlon is a novelist, short story writer and essayist. She is the author of four novels and three collections of short stories, including Telling: Selected Stories, published in China as Short Classics. Her work, often situated in far-flung places, has been widely anthologised and translated. She is currently an adjunct professor at Carlow University, Pittsburgh, and is a member of Aosdána. 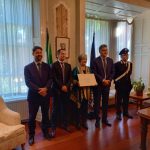