Reflections of a reluctant rugby fan

In the run-up to Saturday’s match against Scotland, and the one against England on St Patrick’s Day: here are the reflections of a reluctant rugby fan.

I had never been a dyed-in-the wool rugby fan.

In fact, I’d never been a dyed-in-the-wool fan of any kind of sport. Early adolescent memories of the muddy pitch beside my school, a hockey stick and freezing temperatures meant that my sporting ardour would cool early on and quickly.
Later, standing on the weekend sidelines while boyfriends played soccer, my interest would temporarily increase. Not in the game, necessarily. Just in the winners.

And later still, parental cheering became a duty happily fulfilled and even more happily abandoned after those childish years were gone for good.

But New Zealand in 2011 changed all of that. Four of us, all close friends, decided that the Rugby World Cup was the One Big Adventure we would embark upon together.

We took this decision because rugby was my husband’s passion and he was already in the grip of the neurological illness that would claim him a few years later. We all knew that. The trip to New Zealand, to follow his Irish heroes, came to be about a lot more than freezing on the sidelines.

This was life itself: carpe diem. This was about celebrating the joy of taking part, of playing your heart out, of making the most of every moment.

Standing on a station platform in Auckland, before Ireland met Australia in their opening game, I spotted a young man wearing an unusual tee-shirt.

‘I support New Zealand,’ it read, ‘and anybody playing Australia’.

I recognised the sentiment instantly: that sporting animosity that exists between the big neighbour and the small: particularly when they live next door to each other. When they have an uneasy shared history. When intense tribal affiliations mean that internal differences are all forgotten in the pursuit of the common enterprise: that of beating the Old Enemy. I was familiar with the narrative, one I’d seen played out at home, whenever Ireland met England on the sporting field.

For Ireland’s first match against Australia, we could secure only two tickets. Fergus, already in a wheelchair, was clearly getting one of them. Our friend, Davy, got the second.

Joan and I watched the match in a Maori community centre in downtown Auckland. It is hard to describe the surreal nature of finding ourselves surrounded by Maoris wearing lurid green shirts with ‘Póg Mo Thóin’ and ‘Kiss me, I’m Irish’. The atmosphere was electric. I think we made as much noise screaming at the television as the 60,000 crowd in Eden Park.

I was hooked. I got it. This was what sport was: the atmosphere, the heroes, the tension, the skill, and all that sudden, unexpected pride.

In a supermarket car park – of all places – the following day, a stranger ran towards us as we loaded our groceries into the boot of the car.
‘I heard you inside,’ he said, his accent unmistakably New Zealand. ‘You’re Irish, aren’t you?’
‘Yes,’ we said, puzzled.
He thrust a bottle of wine into our hands. ‘That’s for beatin’ them f****n’ Aussies,’ he said with a huge grin.
And he fled, leaving us speechless.

Now, I wouldn’t miss an Ireland match. It’s a day to share with friends – wherever we are.

And yes, I know it’s one match at a time. I know there are no guarantees. I know: but still.

I enjoy all the multiple ironies, too. We shouted for Scotland while they were beating England. But we meet them on the 10th March, so we won’t be shouting for them that day. And then we’ve to meet the Old Enemy.

On their turf. On our Saint Patrick’s Day.

I’ll have my green jersey with me. And my memories of Eden Park and a young man on a railway platform.

I know just how he feels. 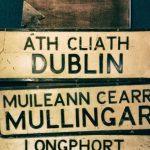 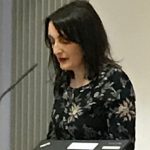