‘I think,’ said Eimear McBride, ‘that the noise of sex in the world is very loud – and none of it is true.’

She was addressing a packed audience at the DLR Lexicon last Tuesday night and I believe it is safe to say that we hung on her every word.

Part of the excellent DLR Library Voices series, Eimear was being interviewed by Sinéad Gleeson whose gentle, insightful questioning allowed the author the time and space to develop her train of thought. Throughout the event Eimear was reflective, honest, passionate – and funny.

I love hearing other writers talk about the ways in which they approach their work. Eimear’s first novel, A Girl is a Half Formed Thing exploded into full-blown literary life in 2013.

It was followed by a play of the same name, in which Aoife Duffin gave an astonishing performance. Full of raw suffering and fractured language, ‘Girl’ needed a ‘sledgehammer’, according to her creator. In this second novel, The Lesser Bohemians, the author lays down her sledgehammer and reaches for the precision of the scalpel.

I’m looking forward to reading this new work: a novel, according to the author, which takes up at the point that ‘Girl’ leaves off.

Eighteen-year old Eily moves from Ireland to the London of the 1990’s to start her adult life.

An aspiring actor, she plunges into the thriving, teeming city: a ‘sensory overload’ of experience that the young girl must learn to navigate and survive so that she can begin the long, slow journey of understanding the adult world of consequences.

The Lesser Bohemians is also a love story, and it was fascinating to listen to the author describe how she allowed the characters ‘to steer’ what she wrote.

I love this idea: that the characters a writer creates become autonomous fictional beings, making their own choices and carving out their own destinies.

This can only happen, according to Eimear McBride, when the writer knows her characters inside out.

With such dedication and passion, she grew to know her characters very well indeed. And this knowledge, this understanding of motivation and behaviour and dreams and fears is essential: what ‘the writer understands,’ said Eimear, ‘the reader understands.’

The discussion inevitably turned to language.

Eimear talked about her own time as an actor, stressing that performers ‘see language as 3D’.

She spoke about the language of Eily’s intimate self as initially ‘fractured’ at the start of the novel – symbolic of her lack of connectedness to the world in which she moves.

As Eily becomes more connected, the character’s language does, too. And as with allowing her characters to ‘steer’ her in the direction of their own development, Eimear said she ‘follows language where it leads’ her, too.

Part of Eily’s coming-of-age is falling in love with Stephen, a man almost twenty years her senior.

Sex is a way for each of them to be vulnerable, to find each other, and in the process to find themselves.

It is necessary, she said, to write honestly about sex – and to refute the ‘very loud’ noise in our modern world that surrounds it.

Eimear quoted Patrick de Witt’s maxim that a writer needs ‘economy and musicality’ in their writing.

From the extracts that Eimear read to us from The Lesser Bohemians, it was clear that her writing has both – and then some.

In addition, is also has something that is even more precious – it has truth. 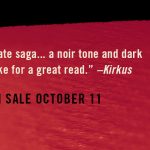 USA launch of The Years That FollowedEvents, News 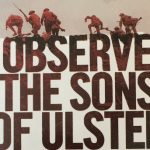