The moon was very full and misty last night as we drove through the Phoenix Park. We’d just attended a wonderful event at Farmleigh House, curated by Mia Gallagher, the current Writer-in-Residence there.
As we left this stately home, deer crossed the road at a leisurely pace; the night was still and slow-moving; my head was filled with the readings we’d been treated to, my eyes with the intriguing, yearning images of rural Ireland by visual artist Maeve McCarthy.

Many of Maeve’s paintings and drawings are atmospheric night-time scenes that are both familiar and uncannily unsettling at the same time. We also had the pleasure of watching her short film ‘The Return’, a kind of meditation on the domestic decay that occupies a central place in her and her siblings’ collective memory and imagination. The film focuses on a now abandoned farmhouse that used to belong to her family.

Maeve’s images are arresting and formed a haunting backdrop to the discussion around ‘Domestic Frictions’ – a series of readings by Mia Gallagher, Nuala O’Connor and John Boyne.

Terrific music throughout was provided by Sean Millar – described by the Irish Times as ‘Ireland’s greatest lyricist’.

Mia read from her most recent novel ‘Beautiful Pictures of the Lost Homeland’. She gave the audience a choice: did we want to hear her read the piece about tidying up the domestic space, or the piece about an angry child?

I’m not sure what this says about us as an audience, but the angry child won. We were introduced to the character of Georgie, the complex, fascinating heroine of ‘Beautiful Pictures’.

We see her navigate the difficult spaces of her childhood: those spaces that open up between her terminally ill mother, Aisling, and her mother’s American ‘friend’, Jan – a smug, all-knowing and poisonous piece of work. But Georgie has her measure.

Nuala read from her most recent collection of short stories ‘Joyride to Jupiter’, a story entitled ‘Napoli Abú’. Narrated by Tara, a woman on holiday in Naples with Beatrice, a female companion that has been foisted upon her by her sister, this is a funny and poignant tale that deals with the blossoming of an unexpected friendship.

The two women are drawn together by the surprising things they share: surprising to Tara, at least. Both reveal their sense of loss around the babies they may never have, and both are having affairs with married men. They reflect upon these similarities as they ponder the ‘magic egg’ that is said to exist in the Castel dell’Ovo – a ‘giant womb’ in the fort overlooking the Bay of Naples.

John Boyne read from ‘The Heart’s Invisible Furies’, a novel that deals with the life of Cyril Avery, an adopted child who is not ‘a real Avery’, according to his adoptive parents. In ten chapters, seven years apart, the novel tells the story of Ireland – as well as that of Cyril and his glamorous friend, Julian Woodbead.

John read some extremely funny passages about the young seven-year-old Cyril, confronted by the apparently more knowledgeable Julian, who insists on checking out whose ‘thing’ is bigger. It is the innocent Cyril’s first introduction to the language of sex – Julian tells him what a ‘pervert’ is, and a ‘sex-maniac’. He describes the sexual act to Cyril who is, to say the least, disconcerted.

We meet Cyril again at fourteen, when he is at confession. He has finally got the courage to tell his confessor about how he cannot stop thinking about sex with boys – specifically Julian – and how he is looking for absolution for calling a nasty and violent priest at his school ‘a prick’. The eighty-something-year-old confessor is so shocked he falls out of the confession box and suffers a heart-attack. Cyril looks for reassurance that the old priest granted him absolution before he fell off his perch.

The panel discussion highlighted the fact that Irish writers are obsessed with writing about family. We’re also, apparently, obsessed with place.

Nessa O’Mahony asked a really interesting question at the end. If everything is now deemed permissible in public discourse – what is there left for the writer to explore?

The answer seemed to me to indicate that we just dig deeper into the sedimentary rock of character, of stories.

John said that as he gets older, he becomes more interested in writing ‘smaller’ – stories with fewer people.

It was an interesting note on which to end a great evening in truly glorious surroundings. 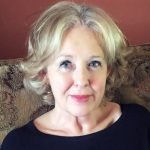