I will brush your hair when it is white – Simonetta Bernasconi

I will brush your hair when it is white, by Simonetta Bernasconi, Creative Writing Course ‘Found in Translation’ 2017.

“I will brush your hair when it is white,” Ronan said.

“You cannot guarantee even one word of what you’ve just said,” she murmured, moving his lips slightly. Patricia’s body was motionless in the bed, her head was still, her hands were closed and Orpheus was at her feet and already asleep.

Only one tiny detail,  well known to Ronan, betrayed her disappointment. It was the state of her nose in the instant in which she answered: nostrils dilated a bit, the extreme expression of her sadness.

“ I tell you I see it, ” he continued quietly, going to lie down at her side. “Your hair will be long as it is now, and white. Every night we’ll go to sleep after I brush it. I see you very well. You will rest your head in the groove of my left arm, you will turn your body to me and you will bid me good-night. I’ll catch you in that little girl expression, between  wise and  astonished, typical of when you have just found a date, or a name you were looking for for a long time in some of those dusty books of yours,” he added, pushing his fingers over the folds of the sheet that covered them, as if to stretch it.

She senses their dog’s movements at the bottom of the bed. Orpheus had raised his muzzle and was watching them as if awaiting the arrival of a thunderstorm.

“You’re absolutely free not to believe it. But I see so much for both of us.”

He turned off the light. Patricia struggled to sleep. Ronan’s tone was so sweet, his belief in his illusions so complete he drove her mad. Ronan, who always ran straight home after his job at Informatic Emerald Island Ltd. in Baggot Lane. He was the always cautious, the always welcoming, the always helpful Ronan.

He and his fucking propensity to believe in God, in the zeroes and ones of the binary system, and in a woman of 42 years of age.  Above all, in her. That furiously irritating man.

He had invented this journey to Italy, with the excuse of her birthday. He had already paid for the flights, booked rooms, mapped the itinerary. Everything was arranged. At the sound of the alarm, Patricia moves, gets out of bed, goes who knows where and why.  Her organised man, who teases her for her inability to be punctual, her inability to feel a sense of time: who says she’s always immersed in a timeless liquid, in a somewhere that he’s missed.

She should have abandoned her papers, the archive.

Searching for details, rebuilding facts, putting events in chronological order, one after the other: this made her feel safe. Her mind in the past, her present in the past. “History is certain,” she was thinking, as she tried to fix the pillow, to rest her neck – “History is dates, events, sources, remains, testimonies.”  That was the job she loved: looking back.

He had taken her to Tuscany. Florence had disappointed her with its dirt.  They had stayed for a long time in Siena, in front of Simone Martini’s frescoes.

They were in Lucca now, in a strange, small, oppressive place:  Amphitheatre Square. Ronan was enjoying it with all his senses but Patricia found it claustrophobic.

They were sitting in an ice cream parlour. Patricia was drinking a milk shake and Ronan was reading the tourist guide aloud.

He was talking about the Ghirlandaio, the Tintoretto, then he stopped.

Patricia saw he was looking closely at an image but she didn’t care to ask him what it was. “We must absolutely go to Saint Martino Cathedral!“ he said.

San Martino, who divided his cloak with the poor and Ronan, with his blue shirt showing off his toned chest: whatever he did he wanted to share with her. Such an exasperating man.

He dragged her into a Romanesque church, with some Gothic influences, not too majestic and rather dark in its interior. He looked around him, searching for something.

“Are you looking for a particular work?”

“I’m looking for somebody,” he answered. “ Ah, here, come, I think I have found her,” he said, coming closer to Patricia. He took her hands to escort her. He always used to do that, she always found those ready hands, telling her “Hold onto us. We’ll treat you gently! Rely upon us, trust us.”

He brought her to a funeral monument. “Let me  introduce  you to Ilaria,” Ronan said with some emotion. At first Patricia paused on a detail that had drawn her attention: “Why is her nose so worn away?”

“It’s a popular tradition that says that rubbing it brings luck in love.”

Patricia examined the artwork in its entirety. She was in front of a stone woman, lying supine on her deathbed. Her head on a pillow, her dress with voluminous sleeves, a tight belt under the breast. And a little dog at her feet.
A shiver.

“Ilaria arrived in Lucca at 23, to marry Paolo Giunigi, the Lord of the town. Think about that: a young girl imagining her future, with her desire to live, to have a family. An explosion of life, hope, joy, freshness. Do you know what happens next?”

“Three years later her husband commissioned a sculptor to create this cold stone monument. She died because of complications that followed the birth of her second child.”

At that moment Patricia felt she loved him more than usual, with less irritation, in his wholeness.

“When I tell you I will brush your hair when it is white, allow yourself to believe it. You must not, You can”, Ronan said, touching the tiny nose of the woman without a future. 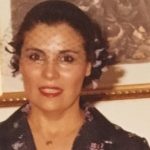