Re-dressing Italy, or My musings on ‘Italianness’ – Cristiana Ziraldo

Re-dressing Italy, or My musings on ‘Italianness’, by Cristiana Ziraldo, Creative Writing Course ‘Found in Translation’ 2017.

It was suggested I think of a theme to share with you that might cast light on what I deem to be peculiarly Italian.

This “request” or “invitation” should have made me jump for joy at the idea that I could share something unique about my country, something that most people would be eager to hear from an Italian-based person. Something that should make me feel proud of being Italian. Instead, all this triggered a kind of itchy feeling and I will soon try to explain why.

It seems that human beings need to attach labels to feel reassured and to be equipped with the right formula, so to speak, to approach some unfamiliar experience or knowledge. On the other hand labels entrap, create stereotypes and do not do justice to what they strive to get to grips with and for this very reason we want to tear them apart, running the risk of creating new ones.

To cut a long story short, what does it mean to be Italian? What characterizes Italian people?

I should start by posing you the following questions:

Look at me, what makes you believe I am Italian?

What are your views of Italy?

My views of the country I was born in vary in time and place, but they are necessarily influenced by my age, gender, social status, profession, personal experiences, education, just to mention a few key aspects that define who I am.
I am more defined by them than by where I was born.

To give you an example: I was born and brought up by a family with strong roots in the territory, namely, Friuli, in the north-east of Italy, a region bordering Austria and Slovenia. This already makes me a hybrid, because Friuli is a “terra di confine” (which means a region bordering other countries and thus a region influenced by them) and from many years it was under the Austro-Hungarian Empire . German and Eastern European culture are still very present in this region, for example every year there is a literary event called Mittelfest. My mother tongue should be Friulian, before Italian. I should have strong roots with my territory, instead I am a bit frowned upon by my family because I always refused to speak Friulian and because I have always felt the urge to travel and learn from other peoples.

This makes me even more of a hybrid, an out-and-out mestizo, a half-breed. But if you meet an Italian overseas and you ask the person where he/she comes from, he or she may tell you “I’m Sicilian, I am Sardinian” instead of Italian.

So what point am I trying to make here?

That we all form our idea of what a country is all about on the basis of what we see, read, on the basis of who we meet. To me the notions of nationality and identity seem stale, outdated because they imply a notion of purity and exclusivity which are anachronistic. “Global” – with all its limits – implies the absence of impurity, melting, contamination which blurs any sense of national purity. So bearing these elements of skepticism in mind, the notion of Italianness acquires more humble traits.

The main aspects that cross my mind when I think of my country are:

ART, music, painting, sculpture, architecture and history of course (the Romans). We have an extraordinary tradition of art and literature and paradoxically when Italy did not yet exist as a nation, it was the point of reference for culture throughout Europe (think of the Renaissance). All the more so if we reflect upon the Grand Tour: many European intellectuals came to Italy to “form themselves” culturally and receive the appropriate education. Think of Dante whose work is the archetype of life and Petrarch whose work is the archetype of love. Boccaccio who may be considered the archetype of what nowadays we vulgarly refer to as “la dolce vita”. A dolce vita mocked by Fellini in his film by the same title.

Italy is definitely a very complex country. Within the same region you have different traditions and dialects, let alone within the same country. As a people we are the result of different peoples and thus of different customs and traditions. What you eat in Friuli is very different from what you eat in Sicily, still you are in Italy.
The melting pot of different inflections, dialects and languages make Italy fascinating to visit from the heel to the upper part of the small boot. More than other countries Italy was divided until very recently, unification was achieved only in 1870 when only 2 per cent of the population actually spoke Italian. Worth mentioning that the language of the administration of Savoia was French.

Italians are then known for their being obsessed with fashion. Well, that is somehow true for me in the sense that I am affected by this strange syndrome, that I am incapable of leaving my house without having everything matching in colour. But, and with me there seems to be always a but, my husband is hopeless at matching colours or styles, and he is Italian, indeed.

The presence of the Vatican and the influence of the papacy has meant Italians are known as a religious people. I have a religious name, Cristiana, yet my parents never go to church and neither do I. But I do have a strong sense of guilt if I do not do what I am expected to do. Where does this sense of guilt originate from, if not from a Catholic background?

Italians are known world-wide for pasta, pizza and wine. I love wine, but I have lots of friends who are teetotallers, Laura, my friend here, is one of them. I like pizza, but I rarely eat pasta, I prefer rice. Yet food plays an important role in the Italian culture. You do not meet your friends for tea, you meet your friends for dinner and you mix together the pleasure of spending time with people you really care for with the pleasure of tasting good food and good wine. Every region in Italy has its own festival linked to its culinary roots. In my region there is a town called Udine known for its wine, prosciutto, cheese “di origine controllata”: this town hosts the food festival “Udine doc” in autumn.

All provinces within the same region organise local festivals, called “sagre” where you go to share something with the community and that something is always food and music. At “sagre” people usually dance popular dances or ball-room dances. So food definitely plays an important role in the Italian culture.

Italians are notorious for mafia, corruption and scandals in different fields. Yet I lived in different countries and travelled a lot and I saw the same dark spots, though covered up. Italians seem to like to wallow and revel in scandals to the point that scandals are no longer scandalous. We always think that something worse might be round the corner.

Italians love “la bella vita”, that is comfort, having fun, sporting nice clothes, cars, and sometimes beautiful women. Well, what does this mean? Does it mean that most people love spending time with their friends over an aperitivo, a coffee, some food? Doesn’t this happen here in a pub, but with a good pint of beer or a nice glass of whisky?

I love looking at Italy through the eyes of my foreign friends, of writers, poets, artists, who spent some time in Italy and were spellbound by it. They infuse me with powerful energy and this is the reason why I would like to conclude this speech of mine with the American photographer Steve McCurry’s words:

Even in the most forgotten and hidden areas of the country you will come across massive amounts of elegance and poetry, architecture and art. In Italy I like to explore the old and new and see how they intersect. And… if I had to recommend a place to visit in the world I would not hesitate: it’s Italy. 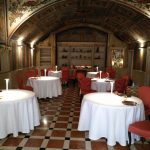