A story of book covers

It is always a thrill when see your book published.

When you catch a glimpse of it at last between covers, sitting on a bookshop shelf – actual or virtual – and you can’t quite believe it.

After all the years of solitary creative effort, then the months of editing (all writing is rewriting), then the run-up to publication when everything is out of your control…

No, says the editor, you can’t rewrite the first four chapters. We’re within a week of going to print. No, it’s too late to kill off that minor character, the one you find suddenly unconvincing. No, there’s no time for you to write a whole new ending.

The process is finished. It’s over. No means No.

So when I talk about the ‘thrill’ of publication, I don’t mean it in the sense of a universally positive experience. Thrills also bring with them the edge of danger, the undertow of fear, the ever-present anxiety of all those ‘when-will-they-find-me-out’ moments.

And there’s also the knowledge that you know you could do MUCH better this time, if only they’d let you make the changes that came to you in the middle of last night.

Eventually, you have to accept that, for better or worse, your book is out there.

You can almost hear your enemies sharpening their knives; you can see all the negative comments in capital letters; you can feel the dull thud of failure as the book falls off a cliff somewhere – and nobody even notices.

Like the tree that falls soundlessly in the forest because no-one is there to listen.

It’s all part of the writing life. But somehow, it doesn’t seem to stop writers when we are consumed by the story we need to tell. When our fingers itch if we’re not at the keyboard. When, as Stephen King says, once you are driven to write, everything else feels ‘vaguely unsatisfying’.

If we’re really lucky, we get to endure the whole process all over again when the book acquires a foreign publisher. There’s a whole new game of ‘letting go’ that now needs to be learned. If we felt powerless in one language, we now have the privilege of feeling even more powerless in two.

We’re now operating completely on trust: we can’t control the quality of the translation; we often won’t see a cover until it’s too late; and we’ll have no idea how well it’s being promoted or marketed.

There is only one solution to this thrilling dilemma, as Anne Enright remarked recently, and that is just ‘go back to the desk and write some more.’

That’s all we can do: we have no idea how our work will be received, so the only thing we can do is write the best work we can.

Despite globalisation, all audiences are different from each other.

All psyches are different; literary tastes differ from one country to the next. And that’s a comforting thought, too – that not everything needs to be dumbed down. It’s an act of hope, or faith, to send any book out into the world. It’s an even greater act to send one out in translation.

Instead, they reimagine a writer’s original work.

They create a whole new imaginative landscape for it, illuminating all the nuance, all the subtext that exists in every work of fiction.

At their best, the work of the literary translator becomes invisible.

The book reads as though it was originally written in that language. But just because the translator becomes invisible doesn’t mean that they are not there. And so I acknowledge their art and I thank them.

This month, the paperback of The Years That Followed (Un terribile Amore) is published in Italy and I love the new cover. In May, the Polish edition will be available, along with the paperback edition for Ireland and the UK.

Despite all the challenges, writing still remains a thrilling process.

In a way, writing is already an act of translation: the transformation of experience into the language of fiction, with all the right words in the right order. 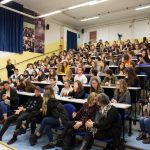 Life, books and everything else with the students in ArezzoEvents, News 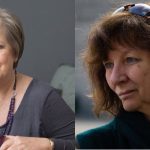