Launch of the Two Cities One Book Festival

This week is bursting at the seams with all sorts of literary activity.

First, my book launch on Tuesday in Dubray of Grafton Street, where The Years That Followed sailed out into the world on a tidal wave of goodwill.

Secondly, Wednesday the 9th March saw the launch of the Two Cities One Book festival for April – an initiative that sees Dublin and Belfast united in savouring the many delights of Lia Mills’s novel Fallen.

And thirdly, Farmleigh will host an event on Thursday celebrating the women of the 1916 Rising – watch this space later in the week.

On Wednesday morning, our city librarian, Margaret Hayes and UNESCO’s Dublin City of Literature’s Jane Alger – legends, really, both of them – kicked off the celebrations in the company of Irene Knox, CEO of Libraries N.I., Dublin’s Lord Maor Críona Ní Dháilaigh and John Concannon, the man responsible for the country-wide programme to commemorate the events of the 1916 Rising.

All of the speakers had interesting things to say about how festivals such as these help to engage citizens everywhere, foster a spirit of collaboration and help us all to reimagine the future.

Many wise words were spoken about the power of reading, too – to inform, to expand horizons, to entertain and above all, to help us to reflect upon and to understand different points of view.

Belfast’s programme was launched last week and among many events, promises to explore the Great War, the paintings of Sir John Lavery, the fashion of the era and the expansion of Belfast’s mills to satisfy the growing international demand for linen.

Irene Knox hoped – as do we all – that this collaboration between the two cities is the ‘first of many’. She highlighted the lasting legacy that will be created by twinning book clubs from North and South.

Dublin’s programme for the Two Cities One Book is diverse and exciting. Check out the programme here.

There is such a huge amount to choose from…

To finish the morning’s business, Lia read a passage from Fallen to a rapt and appreciative audience.

Nobody moved when she’d finished: we all wanted more. 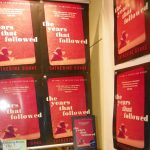 The Years That Followed Launch in DubrayEvents, News 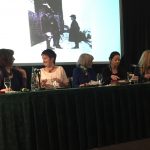 Easter Rising: “1916: Where Were the Women?” eventEvents, News